Here, there and everywhere, people just want to fix their stuff. In addition to our work to push Right to Repair across the United States, where 32 states have proposed related legislation at some point over the last five years, the Right to Repair movement is spreading across the globe.

France will introduce the first repairability scores in January 2021, ahead of an EU-wide law. No one likes the look of a low score, so these labels are meant to incentivize manufacturers to abandon unsustainable design practices such as designing products that are impossible to repair, requiring proprietary tools, and other anti-repair tactics.

A sample of France’s repairability scores that will tell consumers how fixable something is at the point of sale, and an example of how these labels could be handled across Europe.

The original, more ambitious version of the resolution passed

The parliament’s vote sends a clear message that Europeans are tired of barriers to repair and want a change. Backers of the resolution persevered in the face of resistance from liberal and conservative members of the parliament who attempted to tone down the more ardent measures while the Internal Market and Consumer Protection committee debated it. For example, the committee attempted to alter mandatory labeling to voluntary sustainability labeling.

According to Chloé Mikolajczak, a campaigner for Right to Repair Europe, the stronger original measures including mandatory repairability labels passed because of widespread public support across Europeans. A recent survey found that 8 in 10 Europeans believe manufacturers should be obligated to make devices more repairable. “A vote against the resolution would directly deviate from Europeans’ wishes,” said Mikolajczak.

The amendment that passed with the narrowest margin -- by only two votes -- redefines “planned obsolescence” as “premature obsolescence.” 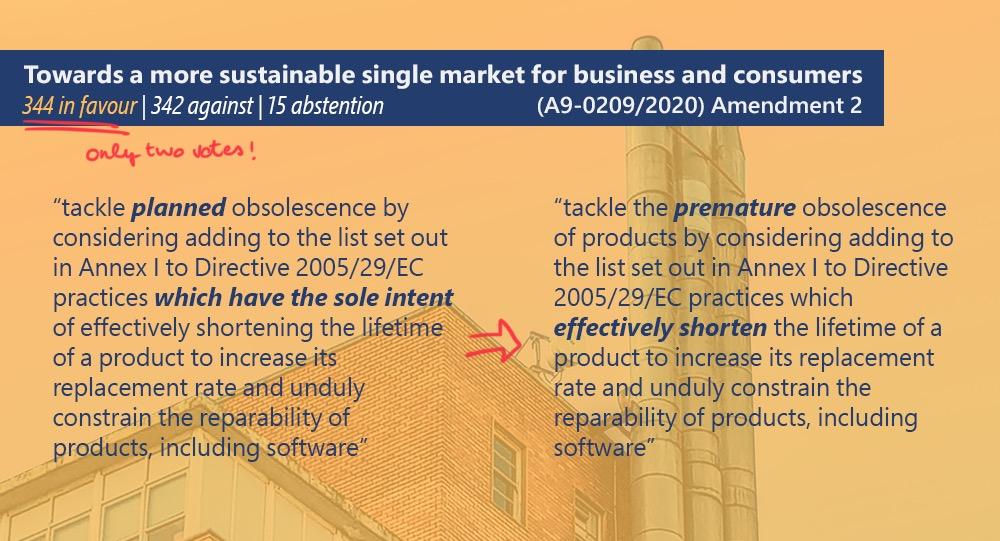 Under the old definition, manufacturers had to be caught intentionally planning to prematurely brick devices in order to prove that “planned obsolescence” took place. Using the new term “premature obsolescence,” consumers or NGOs who claim that a product failed prematurely will not have to gather this kind of proof to take action.

At the end of the day, it doesn’t change the impact on the planet if obsolescence was intentional or just a lack of foresight from the designers. When products break quickly, it takes a toll on the environment. We must stem the rising tide of rapidly breaking gadgets regardless of intent.

Multiple approaches to Right to Repair strengthen each other

With 85 percent of a cellphone’s CO2 emissions escaping during the manufacturing phase, the churn of new devices takes a serious toll on the climate and the earth’s resources. “Europeans are tired of having to trade in their gadgets before they believe they should,” said Mikolajczak. “They are concerned about the impact on the environment of constantly buying new electronics.”

Contrary to the American approach, which focuses on empowering repair outside of the manufacturers control, so far European lawmakers have been focused on increasing manufacturers’ responsibility to design more durable products and stock spare parts for longer.

The fact of the matter is that when France introduces the first repairability scores in January, the information on those labels will be available worldwide soon after it appears on French store shelves. And though the products won’t be labeled with those scores here, you’ll be able to find them online.

Our work at the state level, which empowers both DIY repair and a competitive repair marketplace, is now combined with the European focus on increasing manufacturer accountability on repairable designs and banning practices that increase obsolescence. Together, these approaches can help the world replace a throwaway system for our electronics with something that benefits both consumers and the planet.

It’s time that manufacturers wised up: Around the world, people just want to fix their stuff.